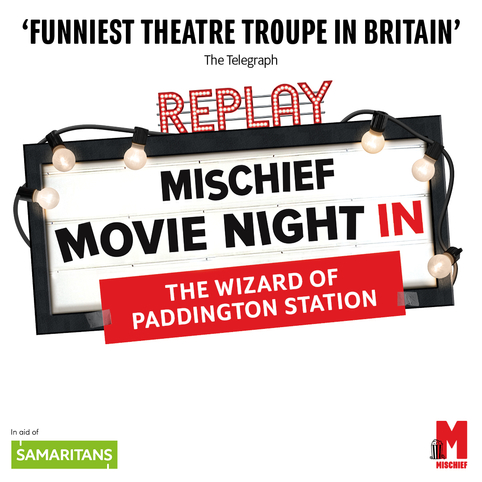 REPLAY: Mischief Movie Night In EXTENDED DUE TO POPULAR DEMAND!

'The Wizard of Paddington Station'

in support of the Samaritans

Mischief, the award-winning team behind The Play That Goes Wrong and the BBC comedy series The Goes Wrong Show, are serious about silliness and proud to be supporting the Central London Samaritans’ Brew Monday Campaign, with fundraising happening throughout January. In a bid to help those powering through the cold winter months, the Samaritans are partnering with Mischief to bring smiles, comedy and laughter to audiences watching on stage and screen.

Booking has been extended due to popular demand, now is your last chance to purchase fundraising passes from 4-7 February just £7.50, with profits donated to Samaritans.

After the roaring success of Mischief Movie Night In, the team have chosen one of their favourites for you to laugh along with all over again. The audience directed the movie live on the night of its broadcast – choosing the genre, location and title. Now you can sit back and relax in the comfort of your sofa, as Mischief improvisers bring that movie to life, including rewinds, fast forwards, director’s cuts and a live band entirely improvising the live score throughout.